Wilson selected at UHSAA 2019 Athletic Director of the Year 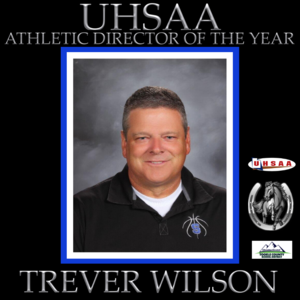 Wilson was nominated for the Athletic Director Award by Jamie Sheetz, Park City High School Athletics and Activities Director. Sheetz said it was a pleasure to nominate him and that he couldn’t think of anyone else who deserved it more.

“I have known Trever as a colleague over the last six years. I am continually impressed with his common-sense style of leadership,” said Sheetz. “He is the only athletic director that Stansbury High has known since the school opened and he has certainly left a positive mark on the school community.”

Robert Cuff, UHSAA Executive Director, said Wilson has been one of the best athletic directors he has worked with.

“He has the respect of athletic directors across the state,” said Cuff. “He is an integral part of the Utah Interscholastic Athletic Administrators Association.”

In November, Wilson received a letter from the UHSAA Executive Director informing him he had earned the award. The announcement letter praised Wilson for his distinguished career and the dedication he has for the students he works with.

“Trever has a positive influence wherever he goes. He is someone I completely trust,” said Warr. “He is an integral part of Stansbury High School’s mission to empower students to learn and succeed.”

She also noted Wilson knows the ins and outs of the policies, rules, regulations and procedures of high school activities.

In addition to coaching and teaching physical education in Utah, he has also worked in California, Oregon, Washington, and Idaho.

The thing he enjoys most about his career is being able to see kids perform and succeed whether it’s in the classroom, on the court or on the field.

His best advice for students is to:

One of the programs he started at SHS that he is particularly proud of is the Golden Letter Stallion Award. The award recognizes multi-sport and activity participants. For a student to qualify, they must earn a total of eight varsity letters during high school in any of the UHSAA sanctioned sports or activities. Students that achieve the award get a profile picture with their accomplishments displayed on the wall outside the gymnasium.

He currently works full-time as the SHS Athletic Director. This is the first year in three decades he has not coached a team.