A look back at the 2018 Administrator of the Year 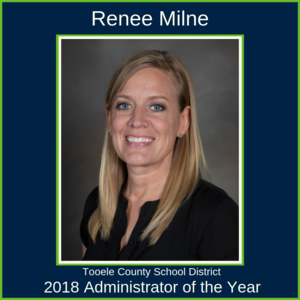 Creative. Professional. Passionate. A strong leader. These are just some of the words Senior Executive Staff members of the Tooele County School District use to describe the 2018 TCSD Administrator of the Year, Northlake Elementary School Principal Renee Milne.

“(She) is a professional in every sense of the word,” said Bryce Eardley, TCSD Tooele Area Director. “She’s always on the move doing something of value that will ultimately benefit students. She loves her students and wants the absolute best for them. She works tirelessly to ensure they are getting the best. The best teachers. The best instruction. The best curriculum. The best building. The best everything.”


It was because of these reasons and more Milne was chosen as Administrator of the year.


“I have been so impressed with her natural ability to lead people. She is a very caring person and you can feel it when you meet her,” said Pitt. “She puts her whole heart and soul into her job at Northlake. She takes care of the kids, teachers, staff and parents.”


Pitt said she is always excited to see what’s new at Northlake Elementary because of the creativity and excellence Milne puts into all her projects at the school.


“I value her professionalism and friendship,” Pitt added. “She is a role model for us all.”


Milne was born in Iowa and moved to Utah when she was 7 years old. After high school, she pursued a Bachelor of Arts Degree and Secondary Teaching Certificate from Westminster College, which she obtained in 1998. She received her Master of Education in 2002 in Curriculum and Instruction, also from Westminster.


Her first teaching job was at Valley Junior High in West Valley City, Utah. Milne taught art to students from seven-to-ninth grade for four years. She then worked at Tooele High School teaching art, concurrent art and served as the yearbook advisor.


In 2008, she decided to further develop her leadership skills, so the Admin of the Year started an administrative internship at Grantsville High School while attending the University of Phoenix to earn her Principal Licensure. In that same school year, she was placed at East Elementary as the Interim Principal.


From the Fall of 2009 to the Spring of 2014 she was an assistant principal at Stansbury High School. Afterward, she became the principal of Northlake Elementary where she has served for the past five years.


Though she loves helping adults, she said the best part of her job is “the kids.” She hopes to encourage them all to be life-long learners, something she said has always been important to her.

This year her school’s motto is “Believe in Yourself.” The phrase has the first few letters of each word highlighted so the words “Be You” are also encompassed in the message. While Milne said it is important for everyone to remember, she said it is especially important for women.


In September of 2018, Renee served on a panel with four other women as part of the Utah Women and Leadership Project. The mission of the organization is to strengthen the impact of Utah girls and women through informing, engaging and developing their voices, confidence, influence and leadership.


Milne said she was honored to be a part of the panel and also to have received the Administrator of the Year Award.